A little pre-production into the weekend....

Alrighty, the weekend is upon us, and as we end the week, here is a size comparison chart... just for kicks. 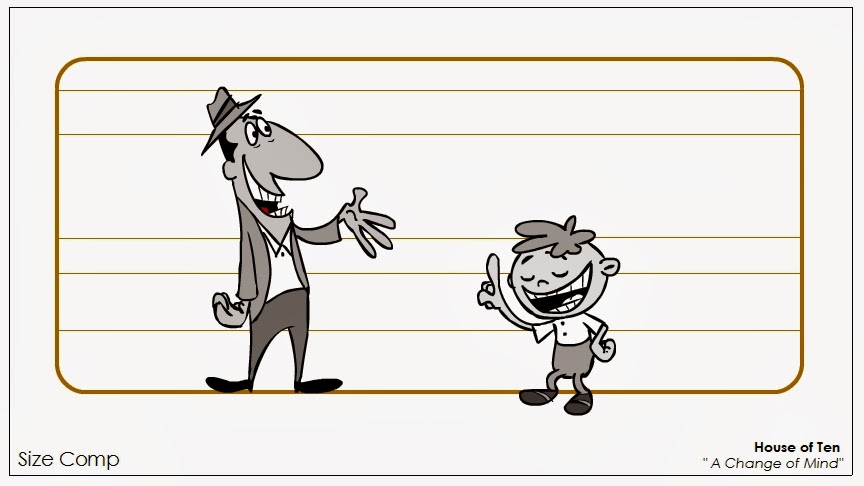 So as you can see... the kid is NOT a giant (unless they're BOTH giants)... so you can throw those story theories out the window (or CAN you?!). That's not what it's about (it really isn't) Though it wouldn't exactly be a stretch considering another project I'm involved in putting together (that I can't really talk about).

So hopefully this weekend I will get the rewrite done on "A Change of Mind" and send off to Colin to get opinions. It's not a whole lot of work, but things have been crazy at my day job.

I also need to get working on this: 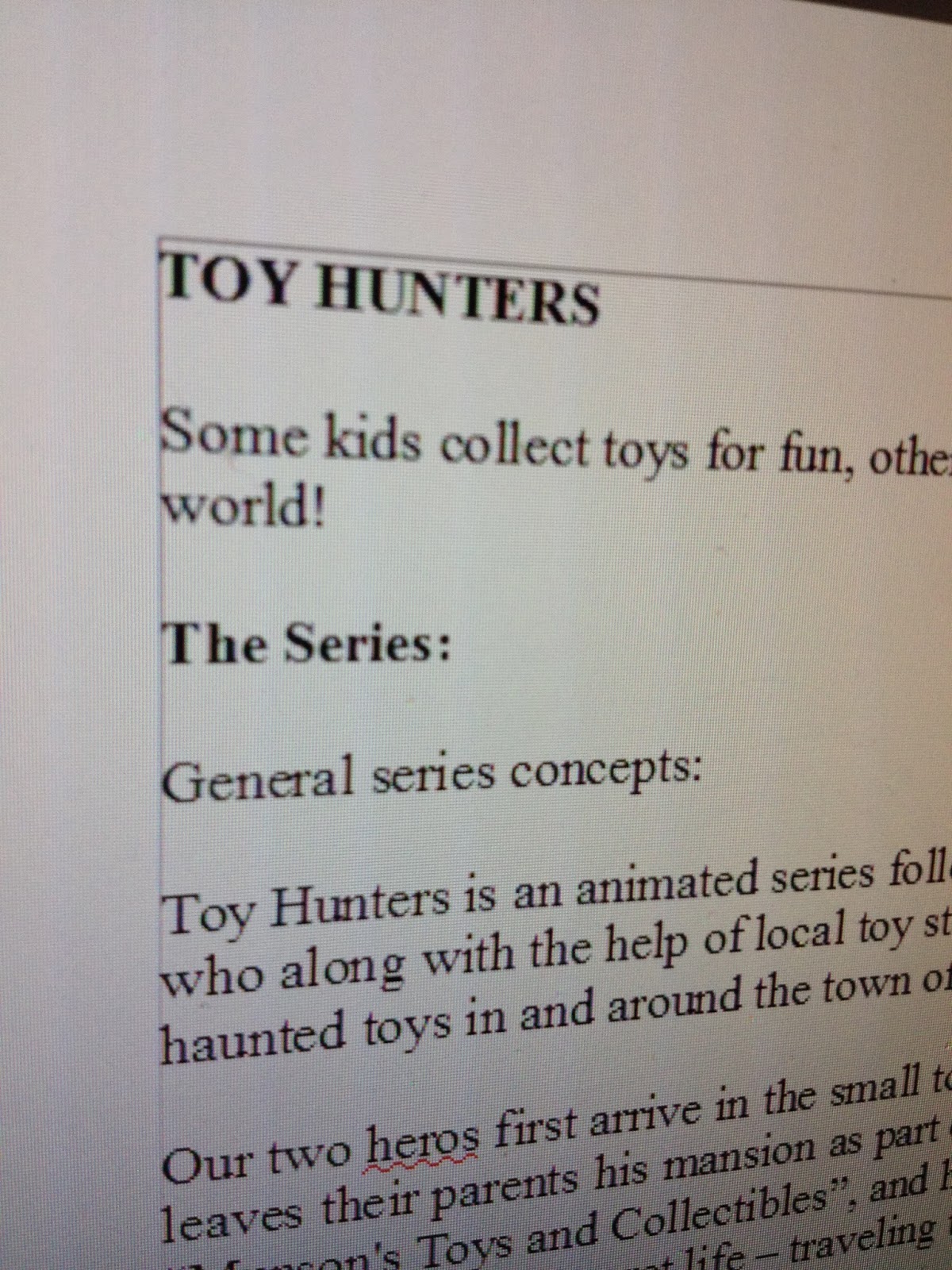 Show pitch I'm putting together unrelated to anything else in the past... but it's likely the pitch I've been most excited about getting together... 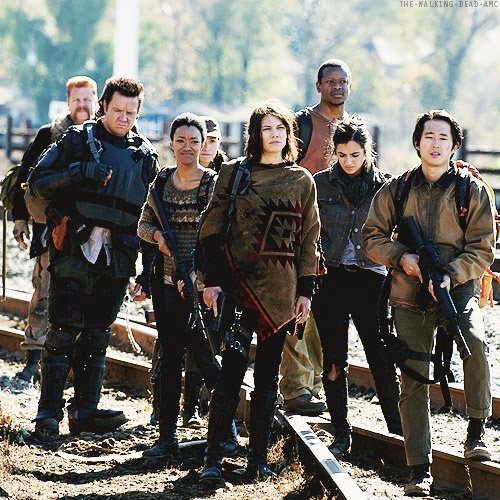 SHIT GOING DOWN!!!!
Posted by Ellery VanDooyeweert at Friday, March 28, 2014 No comments:

How I Spent Last Summer... "Nerds and Monsters" 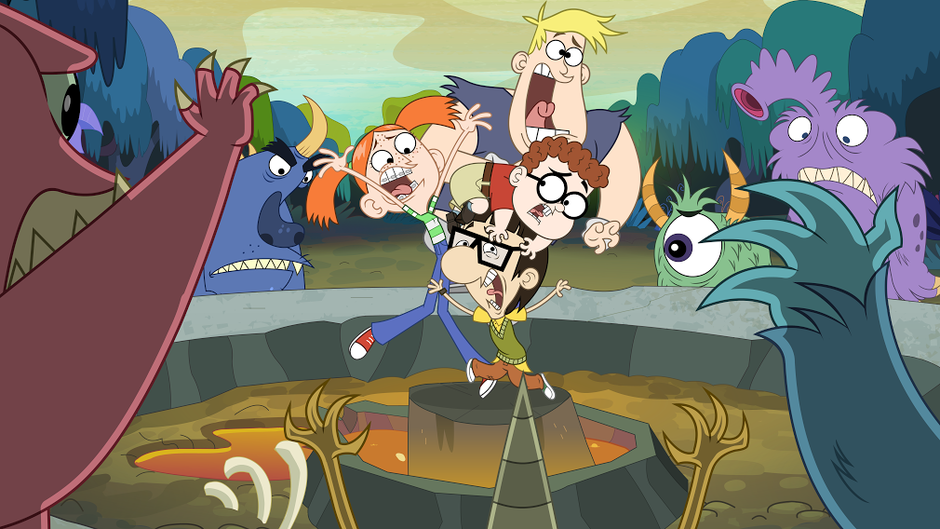 Last summer I had a short stint at Slap Happy Cartoons, editing on their first animated series for YTV. "Nerds and Monsters".

This was my introduction to using Avid Media  Composer, after using Adobe premier for the decade prior. The show was a great learning experience, and I got to use a lot of "fart" and "vomit" sound effects. Once I start showing my lightsaber collection... you'll know which I'd rather.

I've known two of Slap Happy's founders since my early days of animation, and the other two I got to know while on this project. They are all cool people, and hopefully I will get a chance to work with them again.
Posted by Ellery VanDooyeweert at Thursday, March 27, 2014 No comments:

Change of Mind 2014 - Coling Giles and some Development Art!

So one of the main reasons that "A Change of Mind" has found new life is with the addition of Colin Giles to the project. 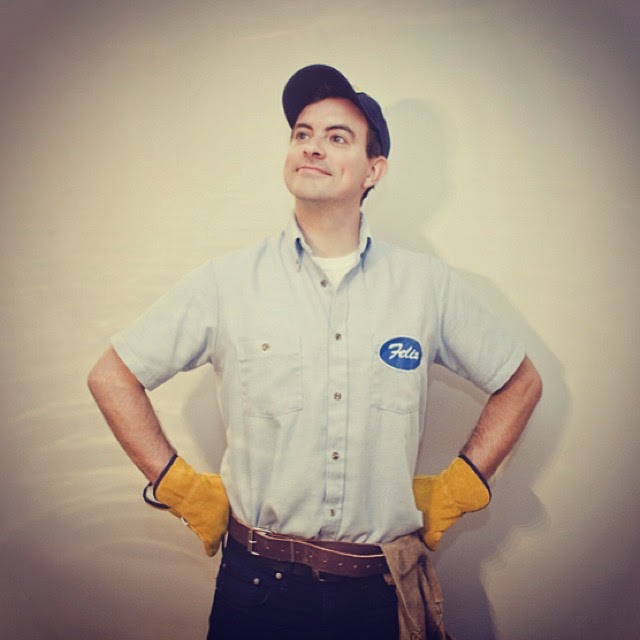 I've known Colin since WAY back in the 90's working at Natterjack Animation where he was an animator (I was an assistant). I've worked in a couple other studios with him (Bardel, Nitrogen) and he's taken part in the art shows House of Ten used to put on, "Deightons Afer Dark". 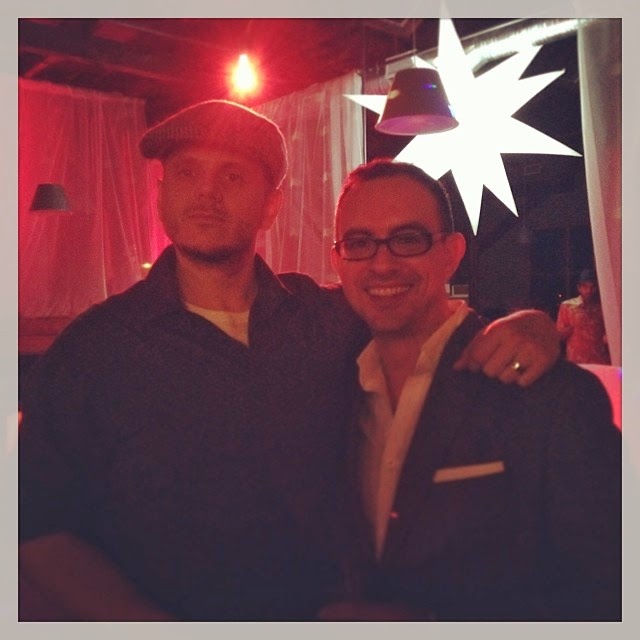 Colin was looking for a project, and I was looking for an animation director. I knew from his other work, that Colin is also the type of guy who's not satisfied with just doing his day job (Animation instructor at Vancouver Film School), and has his own side projects that serve more to entertain, and less to make him money. THAT is on the House of Ten Charter! (the not making money part).

Though the idea to work on this project together has been on for a while, this last year was so busy, it was only in this last month that things started to really take off.

So without giving toooo much of the game away, I'll be posting some pre-production art as the project moves along.

First off, some rough exploratory sketches of our two main characters. 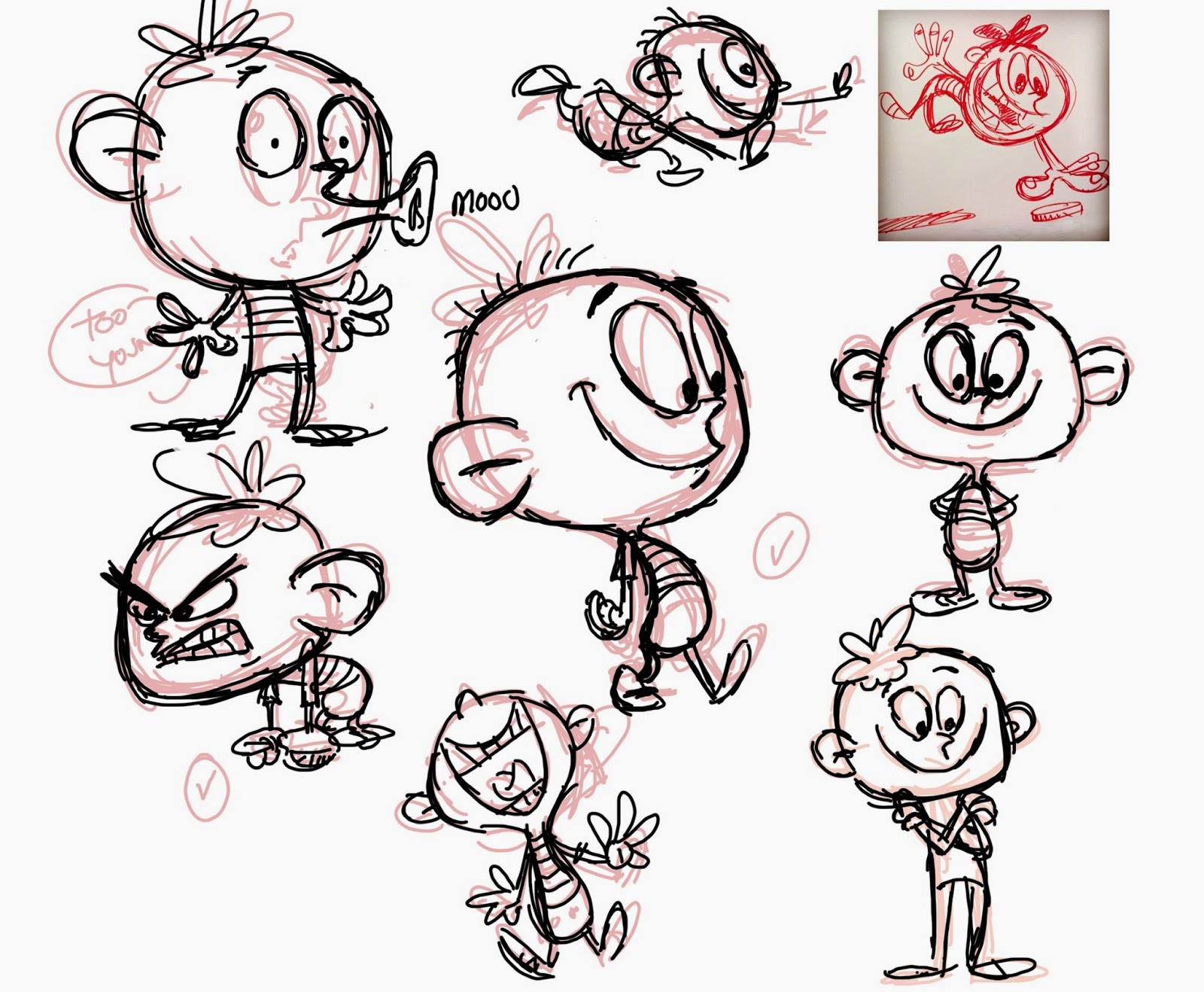 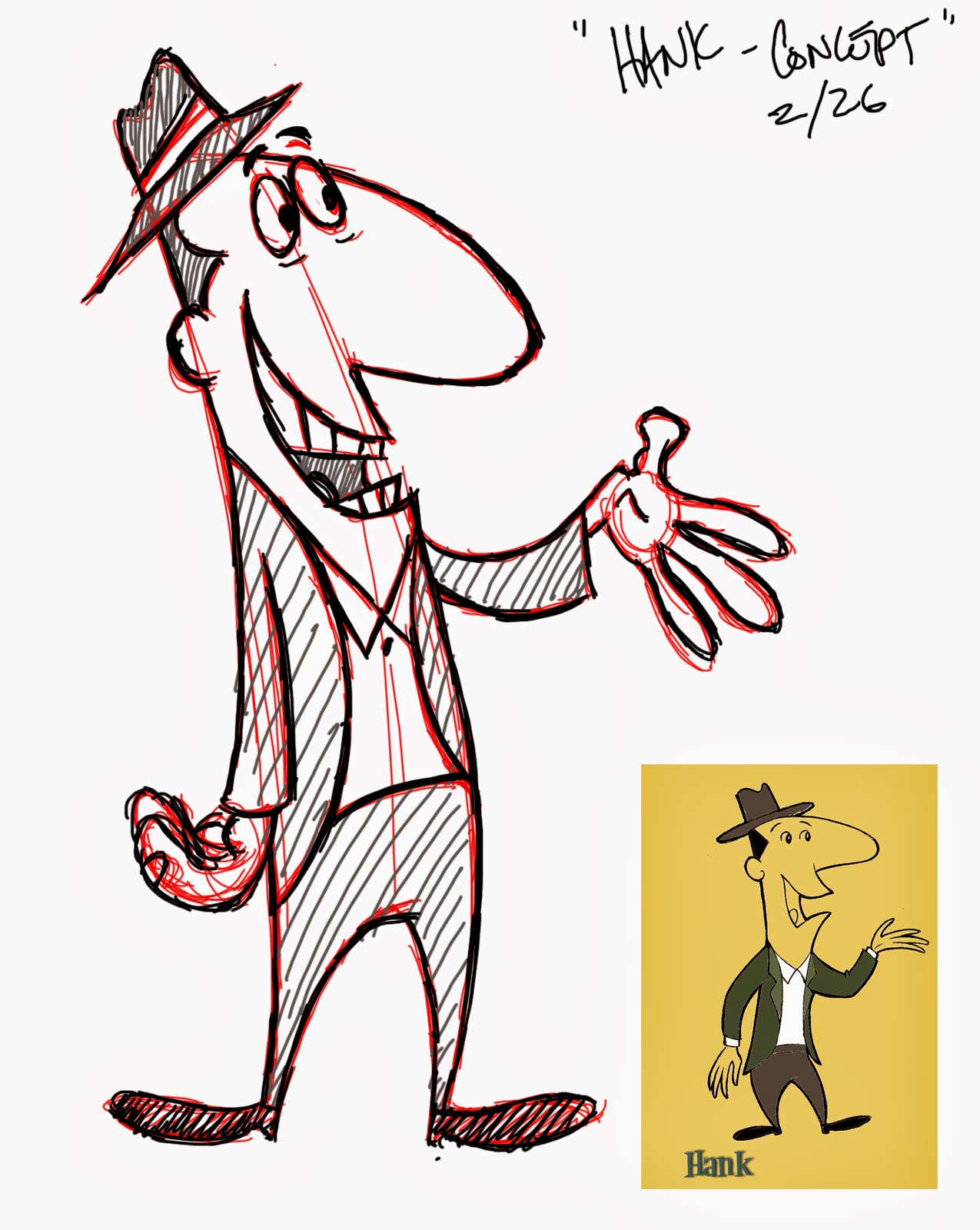 More work to come! And rather than trying to delve into Colin's creative thought process, I will try and have him explain future posted work in his own words.

So yes, Colin will be co-directing this project, and hopefully not House of Ten's only foray into animated shorts.

Posted by Ellery VanDooyeweert at Wednesday, March 26, 2014 No comments:

"A Change of Mind" - A look back, before looking FORWARD.

So a few years back I pitched a project titled "A Change of Mind" to an NFB animated short competition where the idea was to create a short film with the theme of "Changing your mind".

See what I did there? Give em what they want kids!

*Or don't... cuz I didn't get picked to go into production.

However, I still liked the idea, and thought it would make for a cute kids film.

The idea I had for the short was a kid who finds a guy selling "minds". You could change your own mind for one of his amazing minds. This mind salesman rips the kid off, leaving him with the lesson of thinking first before changing your mind.

My friend, Greg Kovacs, who is likely one of the best writers I know, came up with the poem for the project. This guy is a wordsmith. This guy makes me want to be a better man - and also a better writer - and also win trophies (this guy is always winning film festivals... the bastard).

Here's a trailer for the latest Greg Kovacs film:

And here's an animated short from WAAAAY back based on a comic of his. Animated and directed by "Car2Na", D. Campbell Mackinlay (Does the Harry Animations on the top corner of www.ainticoolnews.com)

Hey, I know those sound effects!

So there you have it... from the mind of Greg Kovacs came the poem, "A Change of Mind".

As part of the pitch you had to include artwork, and since my drawing skills haven't improved since film school, I had my friend, Darren Shmidt, do a couple of drawings for it. He literally scribbled a couple of sketches on scrap paper, and I then cleaned them up (poorly). 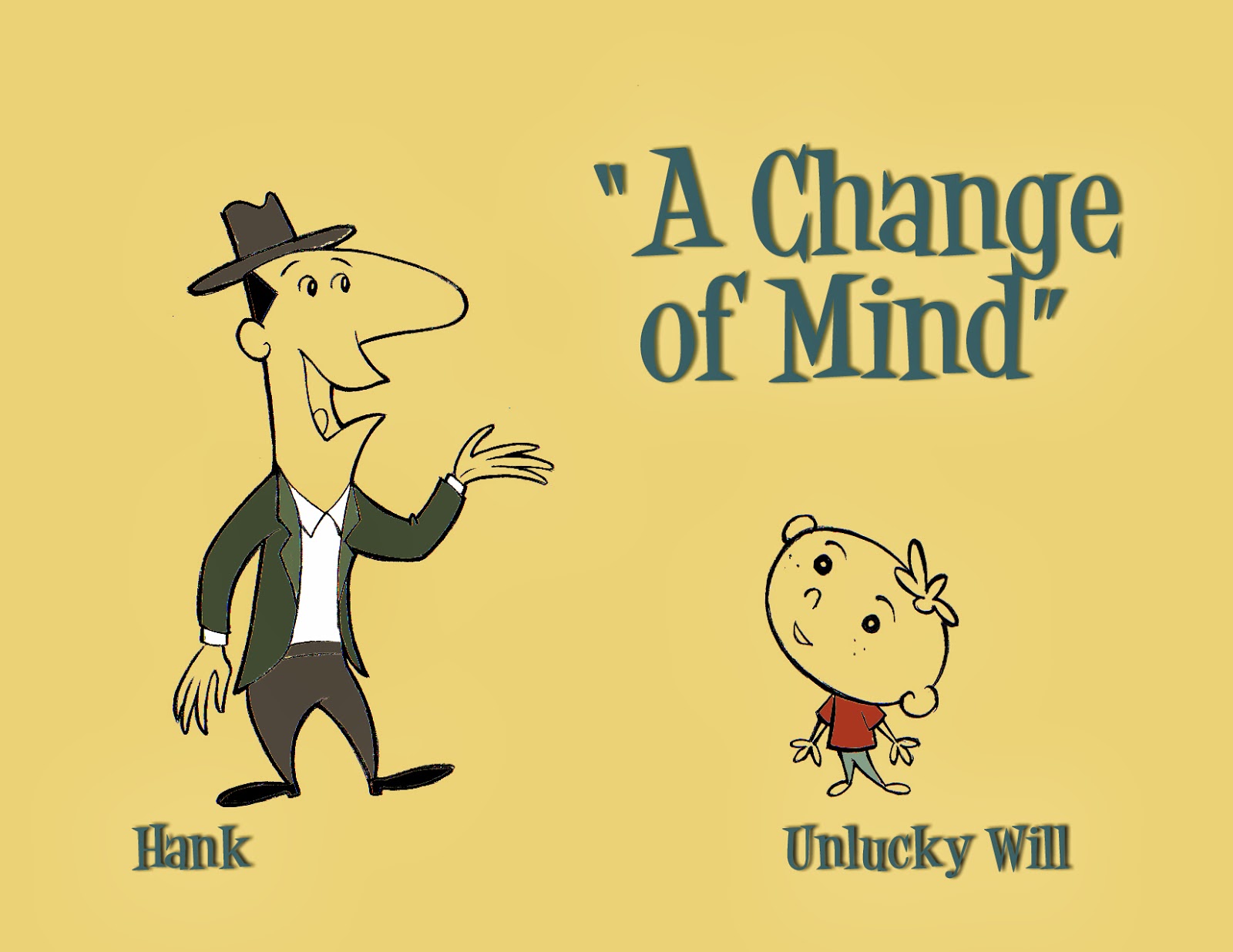 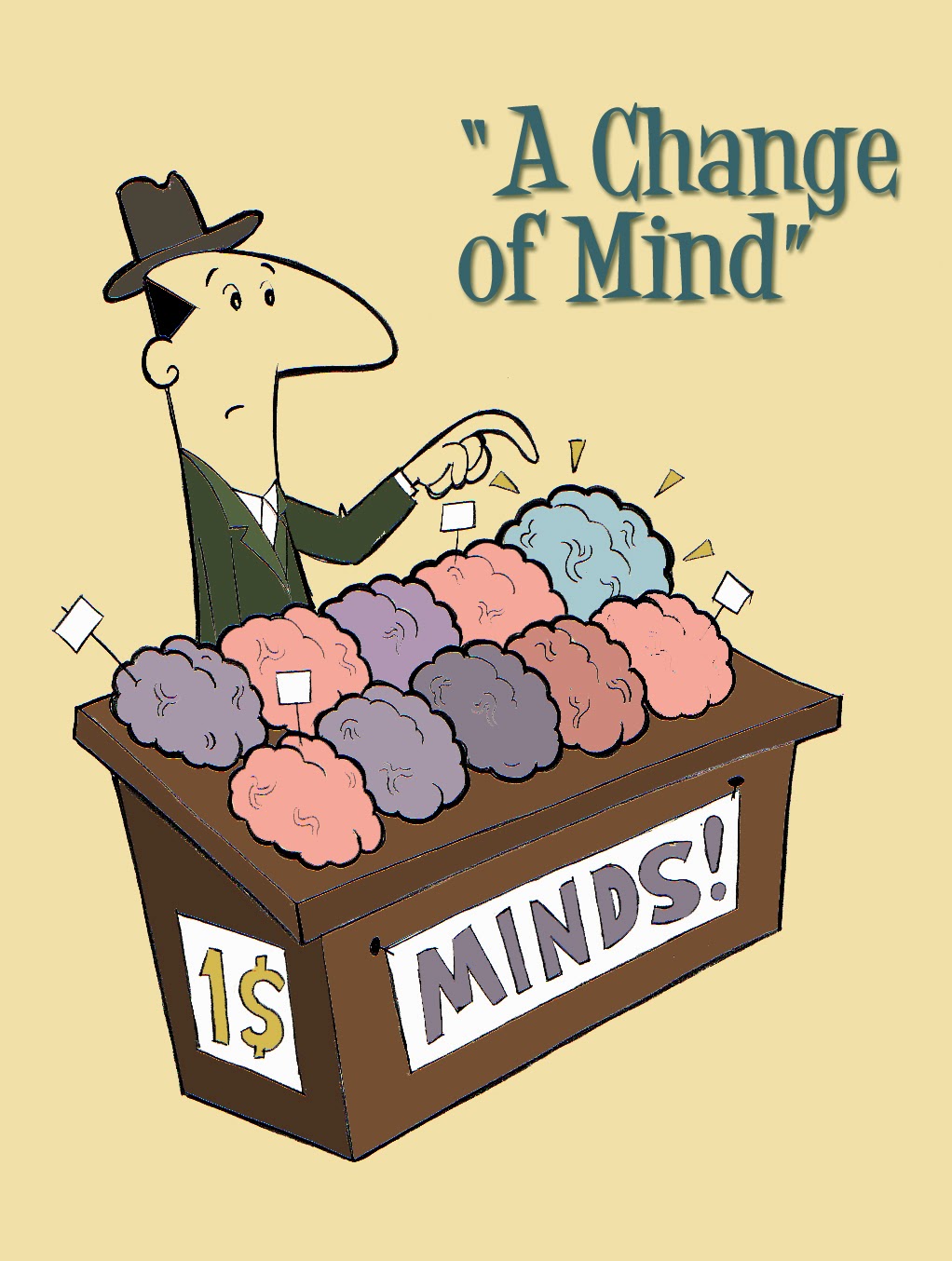 I was wanting this project to have the look and feel of those old 50's UPN toons - but in flash ('cuz hand drawn is just too expensive).

I never lost interest in this project. I had a few people here and there interested in getting it into production, but for whatever reason it just always fell through (the reason is usually because there's really no money in this... this is film making because we love making films).

This brings us up to speed! In the next post we jump to 2014 and introduce animator, Colin Giles, and the further life of this "A Change of Mind" project.

Posted by Ellery VanDooyeweert at Wednesday, March 19, 2014 No comments:

This vid was posted on Seth Rogen's Facebook page.


This is Seth Rogen, Evan Goldberg (the guy in the white T-shirt...Seth's creative partner) and crew watching some scenes from the upcoming Sausage Party (and yes, that is really how they laugh)

Some people call fowl because not everyone is laughing as hard as them... well that's because most of us in the room had already seen it a million times.

You can catch Arlyn and I in the back left seats watching... and Kev is shooting the vid.

There is no sound because, well, you had to be there. Say no more, Say no more.

BTW... it was as funny as it appeared. The first time I saw I laughed til I coughed. Of course I DID have a cold at the time... so...


Posted by Ellery VanDooyeweert at Tuesday, March 18, 2014 No comments:

This is OOOOOLD news now, but since I've mentioned we are currently working with Seth Rogen on his new flick, I figured I may as well show off a side project Kev Pavlovic and I worked on for him.

This came about really quickly... I won't go into boring details, so I'll just say we were asked on a Friday if we would be interested in helping Seth Rogen and James Franco with their video spoof of Kanye West's "Bound 3".

At this point, they (Seth and James) were already using Kev's bike for the shoot, but now it looked like we would be taking their green screen footage and comping in some background footage to make it as close as possible to the Kim and Kanye version.

We worked 24 hours straight to have it out by the Monday morning, and in the end, we were more than happy with it.

They were a LITTLE worried that Kim and Kanye (especially Kanye) would lose their shit over it.... but they knew better. When the world all loves something, can you really be the one yelling "NOT FUNNY MOTHAH FUCKAH!!!"

One of the highlights... working on it got invited to "The Interview" wrap party... where they screened it repeatedly... 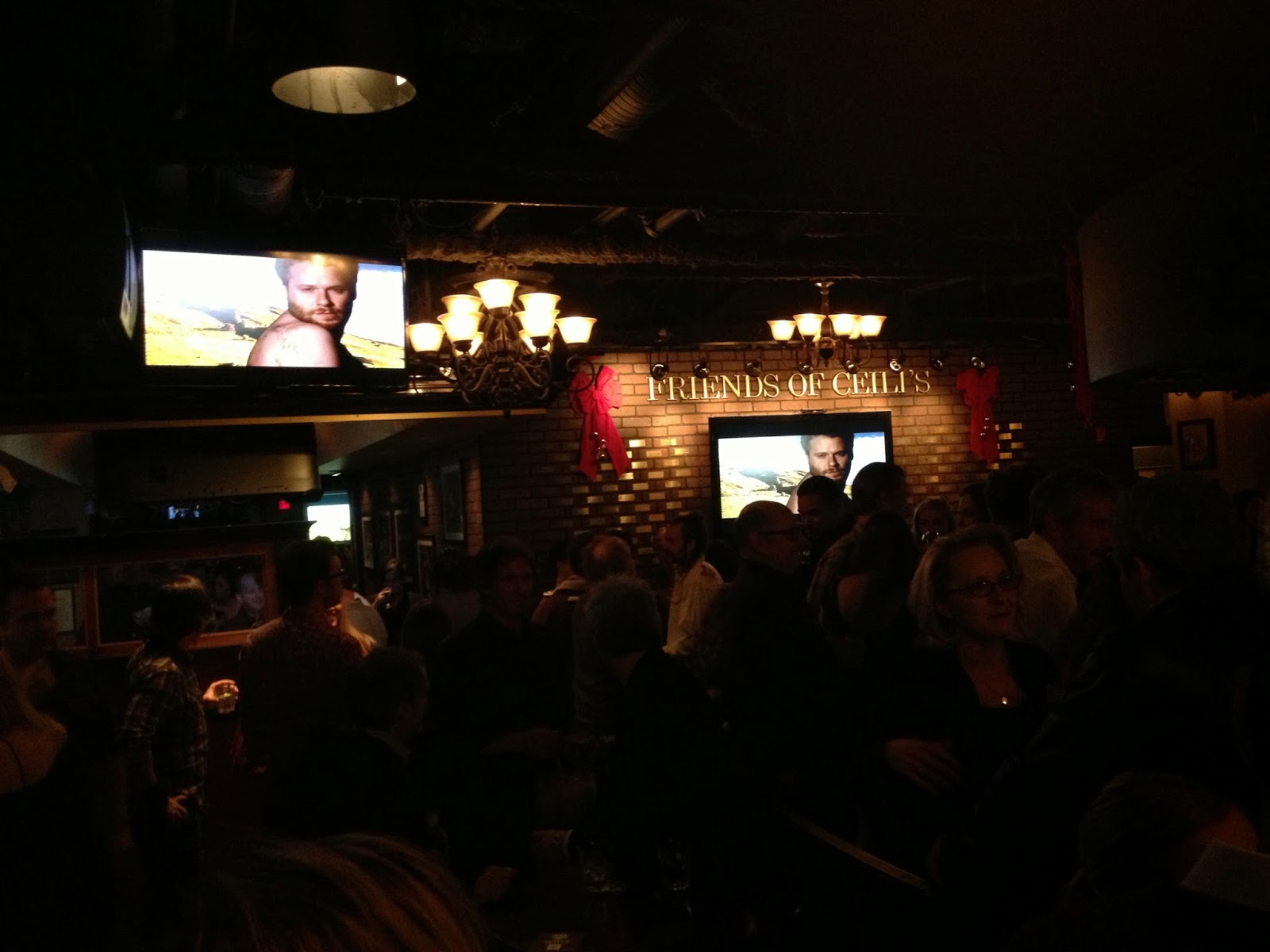 And that wraps of the Bound 3 adventure.

And yes, this does mean if we ran into Seth and Franco on the streets, they would have no idea who we were until we yelled "WE MADE BOUND 3!" at which point Seth would laugh, nod "oh okay!" and then head on his way.

Posted by Ellery VanDooyeweert at Tuesday, March 18, 2014 No comments:

Well this last year I got pretty busy with work and so my personal projects kind of got left in the dirt. However, over the last couple of months, my day job hours have eased off a bit and I'm finally ready to get to that long list of projects I've been sitting on.

So while this site that was meant for documenting and showing off work created by myself and my talented chums through "House of Ten Productions", it actually turned into a blog updated once a year to countdown to Christmas.

SO, that said... time to steer this site BACK to it's intended purpose, and hopefully get busy enough with House of Ten projects to be updating A LOT.

I suppose I'm trying to take a cue from the two guys heading this whole project I'm on at Nitrogen, Seth Rogen and Evan Goldberg. 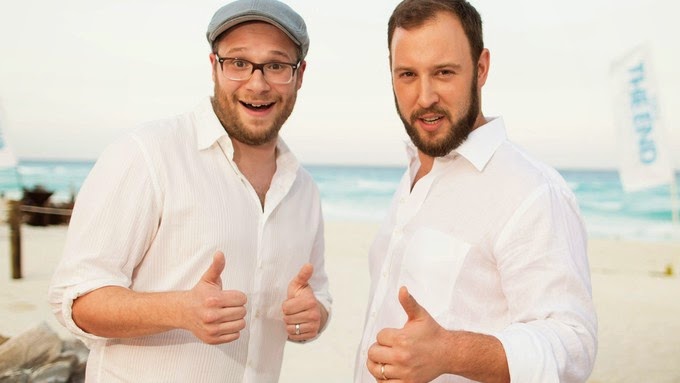 The amount of shit these two have going on at the same time is crazy and inspiring. These two are currently at the point in their careers that they COULD take it easy, but instead seem to be working harder.  I guess when you've reached that point when you can get almost any idea you have put into production, you take advantage of the situation.

That said, we are obviously NOT in that situation. But just because people aren't clawing over each other to throw money at House of Ten projects, doesn't mean they can't get done. It's just going to take a little longer. And just because no one is wanting to bankroll getting our projects to screen, it doesn't mean we can't do as much of the pre-production as possible on our own. 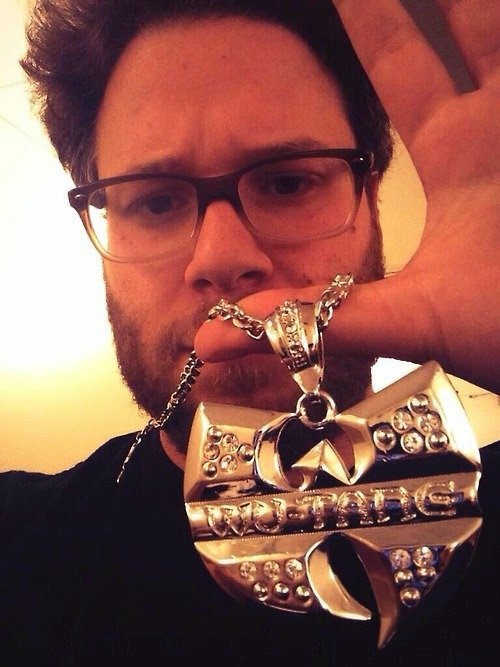 So House of Ten's new mission statement is simple: Follow the lead of two stoners from Point Grey that made it, and work our collective asses off to get our own stuff made. It's very similar to "fake it til we make it"
Posted by Ellery VanDooyeweert at Monday, March 17, 2014 No comments: